​The Trail:  The Richmond Vale Rail Trail (RVRT) will be a multi-purpose, shared pathway, 40km long (with all connections), typically comprising a 3m wide sealed pavement. The Newcastle LGA section will run from Shortland to Tarro and from Hexham to Lenaghan (Pambalong Nature Reserve), with Fletcher and Minmi connections. The Lake Macquarie and Cessnock LGA section will run from Stockrington to Kurri Kurri (Log of Knowledge Park).
Submissions for the Cessnock City Council – Richmond Vale Rail Trail (RVRT): Review of Environmental Factors (REF) for Western Trail Section (“Stockrington to Kurri Kurri”) are now closed.

​Thankyou for those that provided a submission.
Extracts from RVRT Supporters’ Group Submission about the Western Section of the Trail

The 32km RVRT (40km with connections) will be a continuous off-road shared pathway running from Shortland (near the Hunter Wetlands Centre) to Kurri Kurri (Log of Knowledge Park), connecting four LGAs (Newcastle, Lake Macquarie, Cessnock and Maitland). The trail runs primarily along the former Richmond Vale railway alignment, as well as utilising Hunter Water Corporation pipeline corridors (e.g., Shortland to Tarro segment and Fletcher connection). It will be a multi-purpose trail, supporting a broad range of user groups. The Hunter and Central Coast Regional Planning Panel (PPSHCC-55) granted planning approval in December 2021 for the initial 13km (coastal wetlands) Eastern Section of the RVRT within Newcastle LGA (‘Shortland to Hexham Junction and Minmi/Fletcher’)​ - see Figure 1 below.

The 17km Western Section of the RVRT within Lake Macquarie and Cessnock LGAs (‘Stockrington to Kurri Kurri’) is identified as a ‘road infrastructure facility’ under clause 2.107 of the State Environmental Planning Policy (Transport and Infrastructure SEPP, 2021) – see Brown Line in Figure 1 below. Consequently, a Development Application is not required, with a comprehensive Review of Environmental Factors (REF) considered to be appropriate, under Division 5.1 of the EP&A Act.

The REF [March 2022] presents Concept Design Plans for the Western Section (Appendix A), together with key trail features and benefits, environmental assessments, legislative and management considerations, and potential mitigation measures. Based on the feedback received and other considerations, the two Councils need to separately determine whether this current RVRT proposal should proceed largely as outlined in the REF. 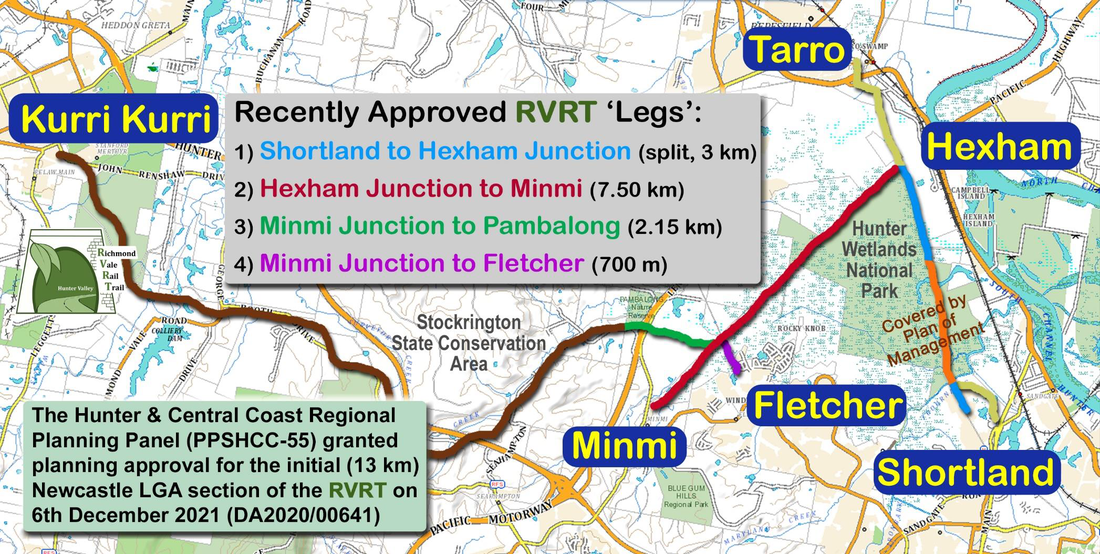 In evaluating the merits of the RVRT, consideration needs to be given to the unique features of the whole trail, and to the opportunities and benefits that will arise from developing the whole integrated 40km trail – and for all user groups (not just cyclists) – both in the short- and the long-term.

As detailed below, there are several inter-related aspects of the RVRT that set it apart from other rail trails and greenways - and which, over time, are likely to contribute to increased patronage, return visits, and a stronger sense of community and regional ownership.

The RVRT traverses a wide variety of landscapes and ecosystems, over a relatively short distance. Visitors will be able to travel from coastal wetlands, through nature reserves and conservation areas, visit historic tunnels in forested semi-mountainous areas in the vicinity of Mt. Sugarloaf, and then travel through rural locations to visit regional towns. According to Callum Vizer’s research report in the ‘Towards the Richmond Vale Rail Trail’ book (2017, Tom Farrell Institute for the Environment [TFI], University of Newcastle), the trail ‘… passes through sixteen distinct vegetation communities, the majority of which are dominated by intact native vegetation’, which add significant value to the RVRT through its ‘… scenic beauty, biodiversity values and provision of opportunities for conservation related recreational activities’. These features stand in marked contrast to many other Australian rail trails, which, while they might be longer, tend to travel through more uniform and cleared landscapes, often along disused public rail corridors that once connected relatively remote towns.

Related to the above, and as noted in Appendix G (page vi), ‘… Establishment of the RVRT will provide a unique conduit for accessing the region’s varied ecosystems, … which will encourage longer-term development of other local walking trails, further social/recreational infrastructure investment, and associated educational and environmental programs. It will also stimulate long-term development of related recreational, educational and environmental programs’.
The critical aspect of this conservation conduit is that ‘… the RVRT passes through or nearby to several high conservation value areas that have previously been largely inaccessible to the general public’.

Most of the Newcastle LGA section of the trail traverses land with high conservation value, including coastal wetlands, national parks and reserves; the only exception being the urban component within Shortland. Indeed, there are at least five regional resources in close proximity to the Eastern Section of the RVRT: Hunter Wetlands Centre; Hunter Wetlands National Park; Pambalong Nature Reserve; Stockrington State Conservation Area; and Blue Gum Hills Regional Park. The Western Section of the trail is equally as well endowed with high conservation value areas, including Stockrington, Mt. Sugarloaf, and Werakata State Conservation Areas.

Another unique aspect of the RVRT is its blending of railway alignments and pipeline corridors to maximise potential community connections and trail use opportunities. More importantly, as noted in Appendix G (Section 2.2.8), the trail ‘links both old and new suburbs with varying characteristics’, providing ‘equitable access for residents with varied socio-economic status’.

Unlike most Australian rail trails, the RVRT also links metropolitan and rural areas. There are also substantial opportunities for the RVRT to become the hub (centrepiece or spine) within a network of regional community pathways. An extension along the Minmi alignment to the popular Blue Gum Hills Regional Park is proposed, together with connections to planned housing estates and onwards to Lake Macquarie LGA. To the southeast, future connections can be made to the University and the wider Newcastle Cyclesafe Network. To the northwest, a variety of connections can be made to locations within Maitland LGA. Westerly extensions further into Cessnock LGA are also contemplated. For example, the Cessnock Trails Strategy (May, 2020) includes a ‘Cross-region Connectivity Map’ and a ‘Trails Network Vision Map’. The latter includes five overlapping zones: Heritage and Conservation (which the RVRT sits within), Hunter Gateway, Wine Country, Outdoor Adventure, and Wilderness Zones. Local connections from Log of Knowledge Park to Kurri Kurri town centre will also facilitate exploration of attractions such as the town murals, Col Brown Rotary Park, and the new Pit Pony statue. Ten Points of Interest within the Western Section of the RVRT are further highlighted in Figure 2 below.

Preparation of the EIS and REF (for the Eastern and Western Sections of the RVRT, respectively), and the numerous supporting studies, have taken considerable effort over the past 5 years, and cost several hundred thousand dollars. However, as detailed below, this is only a fraction of the tens of millions of dollars of Federal and State monies that have effectively been spent on preparatory public infrastructure during the past three decades - just to ensure that the trail and its environs were protected and that the RVRT remained a real possibility.
With all of this preparatory public infrastructure spending, it is essential that we draw on the decades of positive RVRT related planning and finish the job off by making the RVRT a reality! 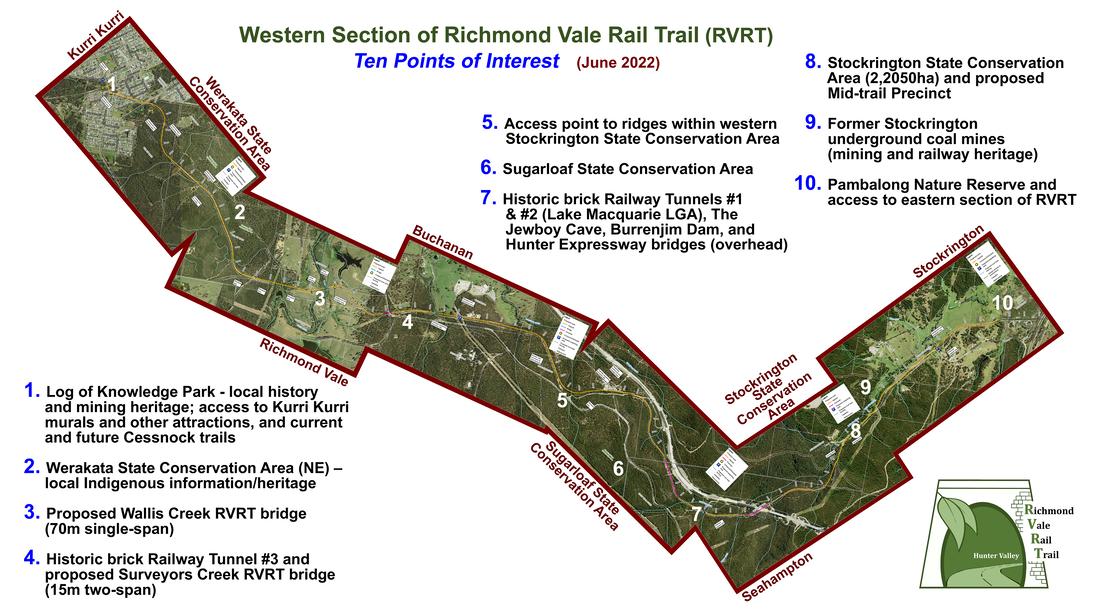 Based on long-term engagement with local communities, more recent discussions about the EIS and REF (for the Eastern and Western Sections of the RVRT, respectively), and our collective knowledge and experiences, we have compiled a list of 23 likely RVRT benefits from a community perspective, grouped into five categories. Our awareness of community sentiments and expectations, and RVRT opportunities and constraints, is drawn from multiple sources, including: over two decades of RVRT involvement; membership of various cycling, conservation, and other groups; numerous planning submissions; and experiences with other developments and rail trails.

The RVRT …
​
Economic, Tourism and Other Regional Benefits

In effect, development approvals for the Eastern and Western Sections of the RVRT implement key goals from the Hunter Regional Plan 2036 (HRP, 2016) and the Greater Newcastle Metropolitan Plan 2036 (GNMP, 2018), and they also represent ‘stage one’ in the implementation sequence for several Lower Hunter Council’s longer-term walking and cycling strategic plans.

The RVRT is much more than a cycleway and it will contribute to at least three of the identified strategic Actions within the HRP: creating healthy built environments (Direction 17); enhancing recreational facilities and connecting open spaces (Direction 18); and growing regional tourism (Direction 9). Likewise, within the GNMP, the RVRT is recognised as an important component of regional plans to expand the ‘Blue & Green Grid’ [waterways & open spaces links], with identified strategic actions including: improved ‘access to open space, recreation areas & waterways’, enhanced ‘nature based tourism through protection and promotion of natural assets such as … the Hexham Wetlands’ (Action 12.1); ‘improvements to active transport networks’, and provision of ‘unobstructed well-connected pedestrian paths and a network of off-road separated cycleways to key destinations, including: schools, employment hubs, shops and services’ (Action 20.1).

Several newer local government plans also include the RVRT, such as: the Newcastle Cycling Plan 2021-2030 (2021); Cessnock City Council’s Cycling Strategy (2016) and Trails Strategy (2020); and Lake Macquarie City Council’s Walking, Cycling and Better Streets Strategy 2031 (2021). Moreover, it is now much easier to see where the RVRT fits within proposed regional cycleways networks than it was when the original design work and documentation for the RVRT was produced.

Combining the recent Newcastle and Lake Macquarie City cycling plans and strategies, there are actually three proposed ‘principal bicycle network’ regional routes that will access parts of the RVRT: the “Fernleigh Track to Richmond Vale Rail Trail via Charlestown (R2)” route (primarily within Lake Macquarie LGA, and which passes through Cameron Park and Minmi); the “Newcastle City Centre to University (Callaghan) and Richmond Vale Rail Trail (Minmi Junction) (R6)” route (via Maryland and Fletcher); and the “University (Callaghan) to Maitland (R8)” route, which will utilise the Hunter Water pipeline corridor between Shortland and Tarro. These proposed route connections with the RVRT are illustrated in Figure 3 below. 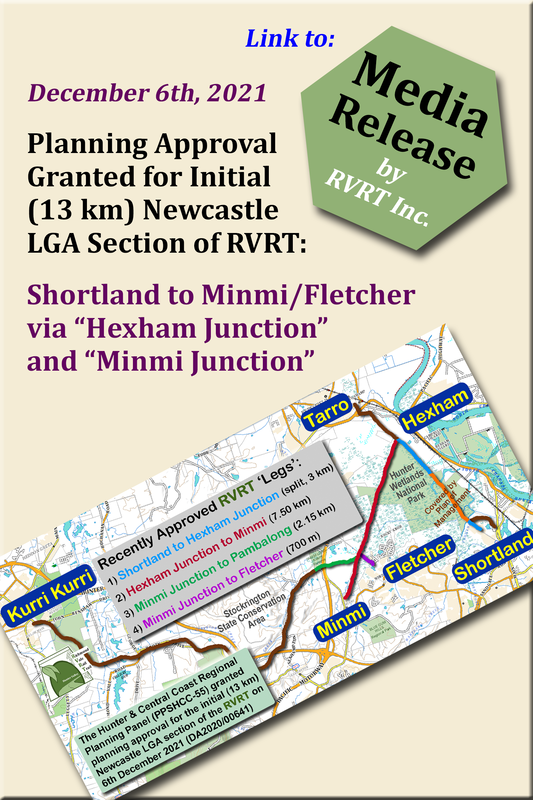 ​I presented a pre-recorded paper at the 2020 Australian Walking & Cycling Conference (Newcastle, October 1-2, 2020) titled - “Richmond Vale Rail Trail (RVRT, Hunter Valley, NSW): Background, Opportunities and Challenges”. RVRT-related planning has progressed significantly during the past 18 months, prompting me to update the material from the original conference presentation.

​Click here to read more about the book "Towards the Richmond Vale Rail Trail"...